Thanks to diverse modern history of Cuba there are cars of many trades on the streets of Havana, Trinidad, Cienfuegos, Matanzas and others. In 2018 Cuban roads are literally transport-museums in action on the streets. There are all kinds of shapes, colors, noise and sizes.

You will see cars from the very first automobile production on any given street in Cuban cities. You can even spot cars like the very first Ford’s T-Model still in use for tourist tours or as an everyday family vehicle. A vast majority of cars in Cuba are American model from the 1950s. From an era when Cuba was treated as USA’s southern state.

The cars from the fifties were huge, beautiful, but unpractically designed. Just the right combination for touring around Havana. Polished roofless pink Cadillacs now reign the streets as taxis and guided tour vehicles. But there are many other automobile makes and classic models like Pontiac, Chevrolet, Buick, Plymouth, Ford, Oldsmobile, and Chrysler. Most of the old American cars in Cuba had their engines replaced by newer motors from Japan like Mitsubishi, Korea like Hyundai. Or even from Russia, so now many of the American cars have a Lada or a Moskvitch engine. Many times a diesel. Just scroll down slowly and enjoy the view: 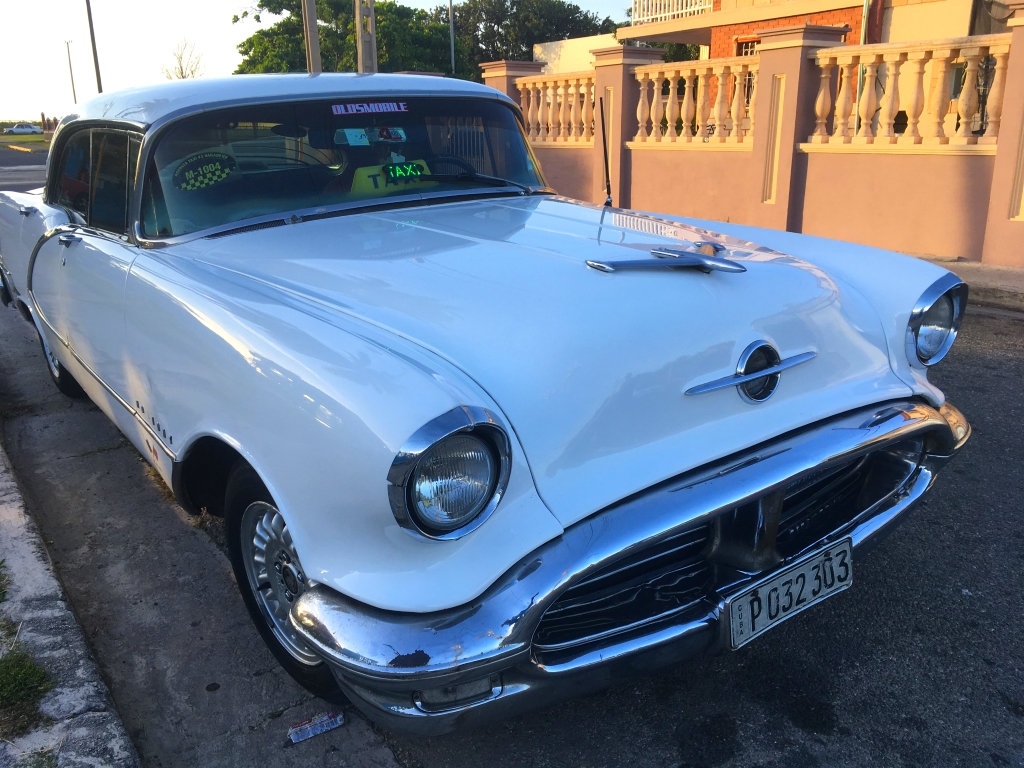 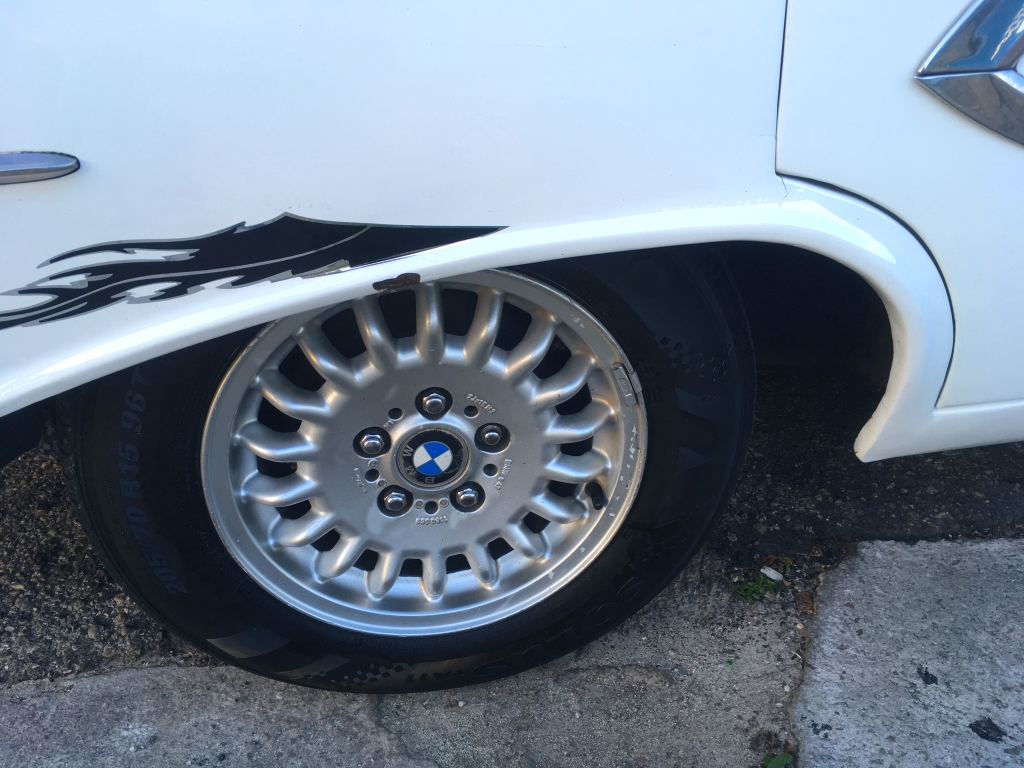 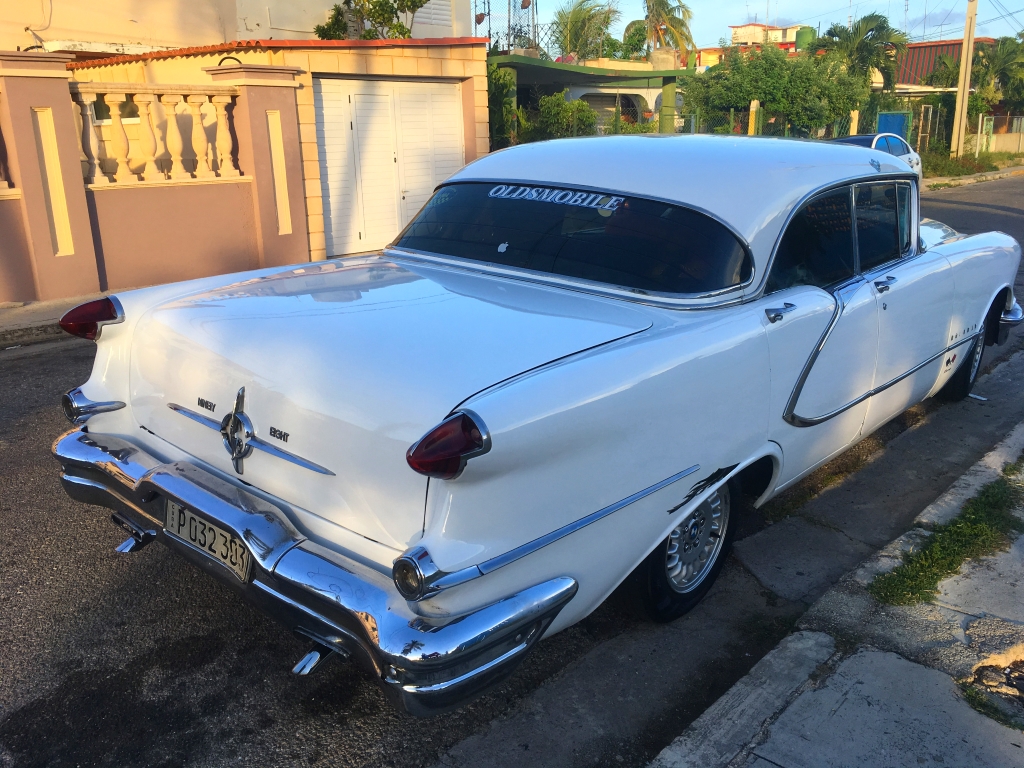 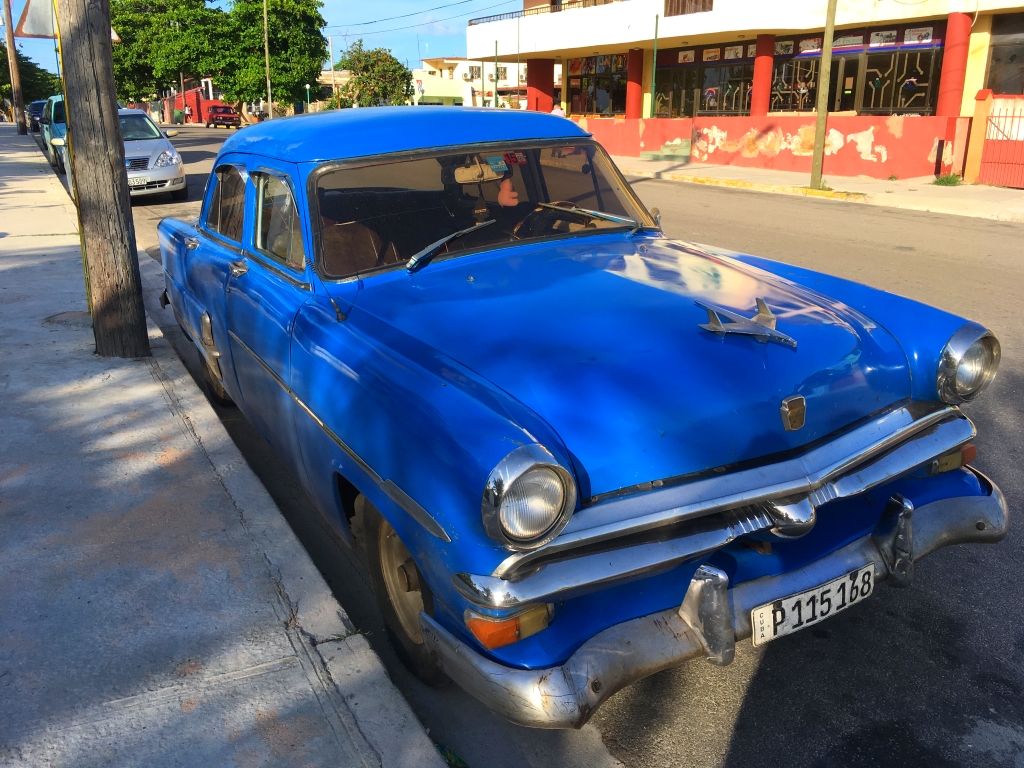 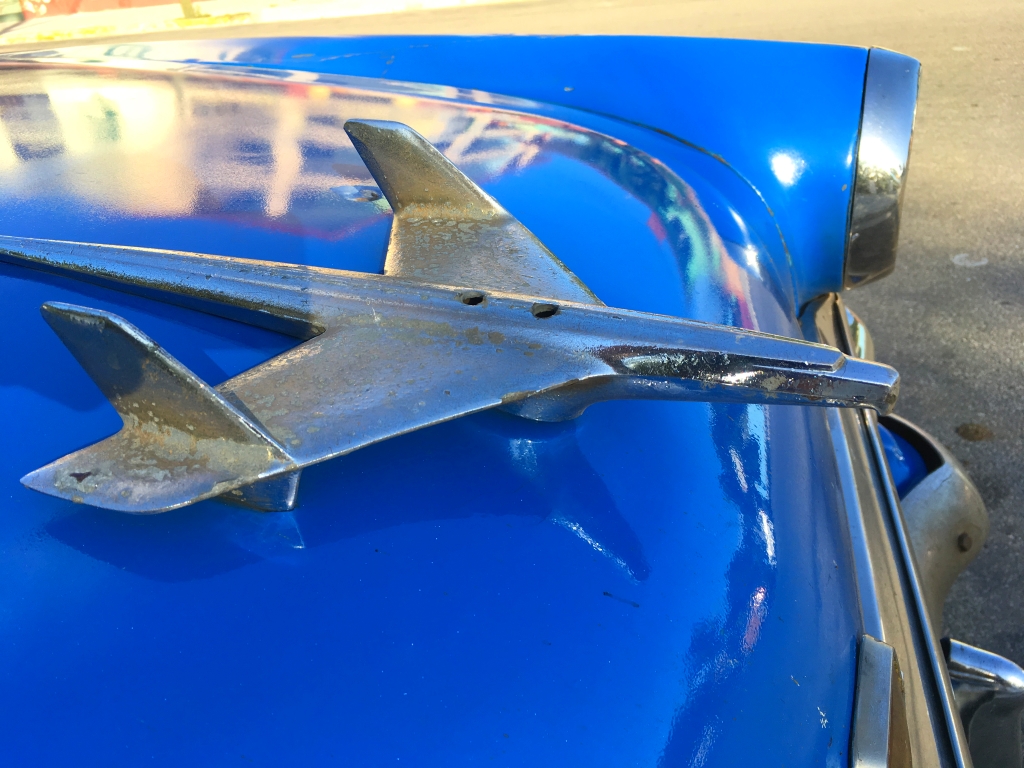 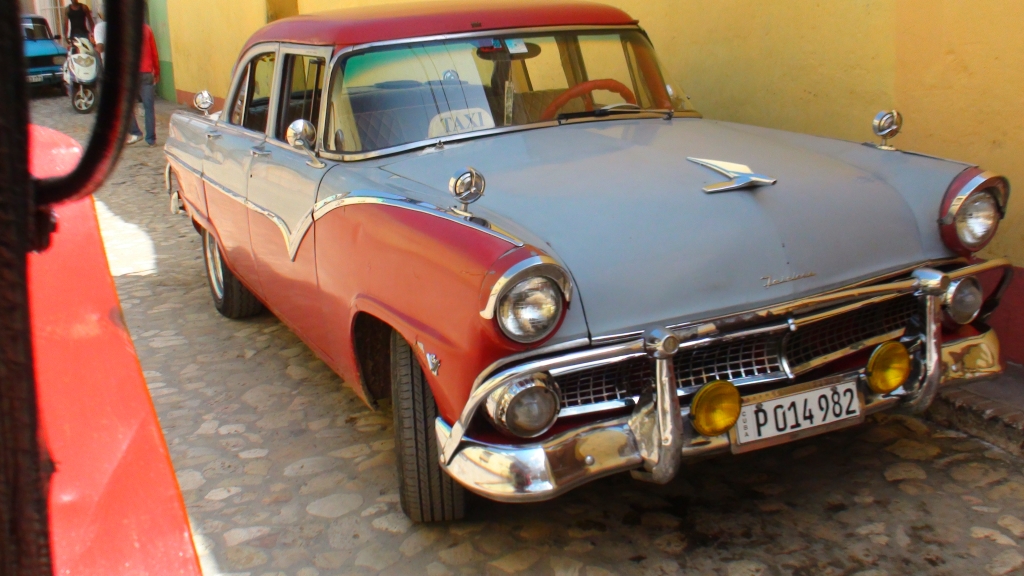 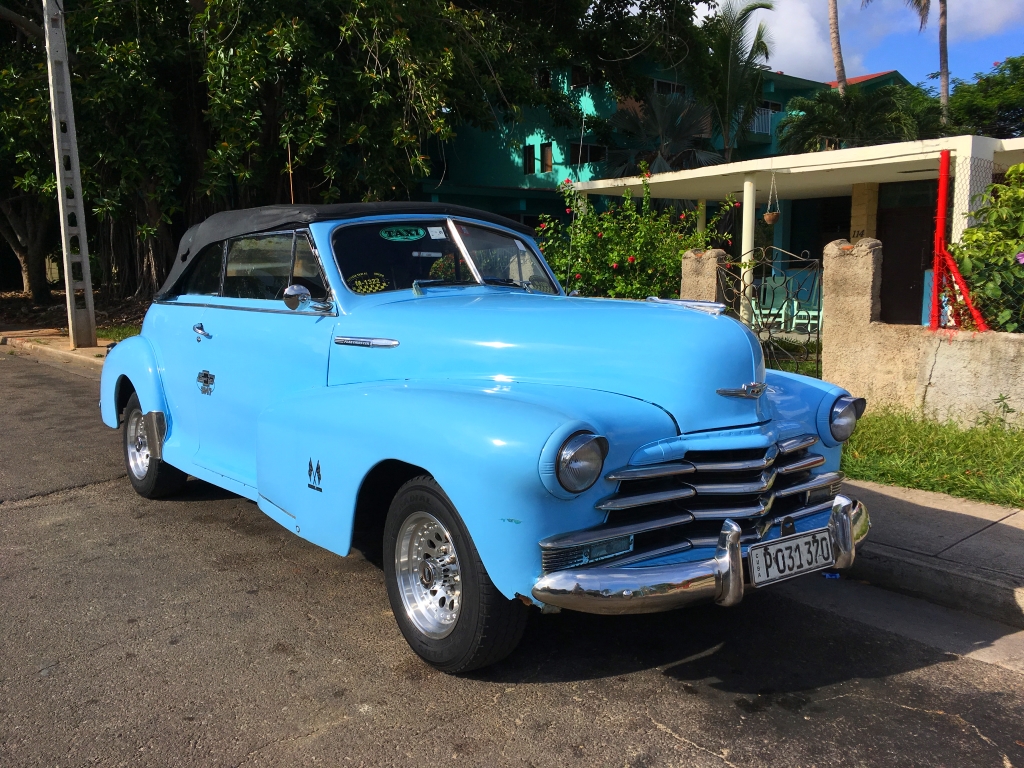 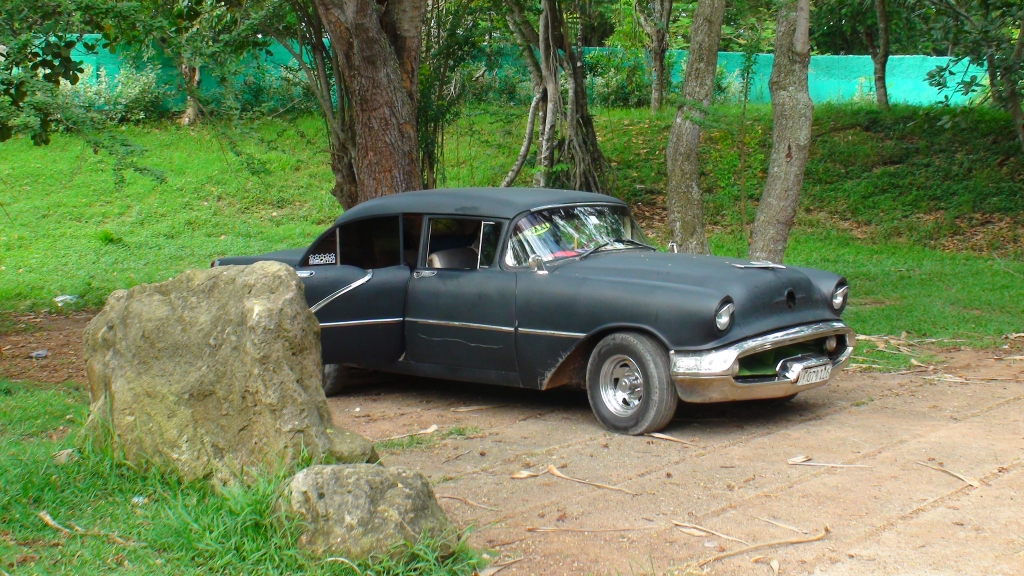 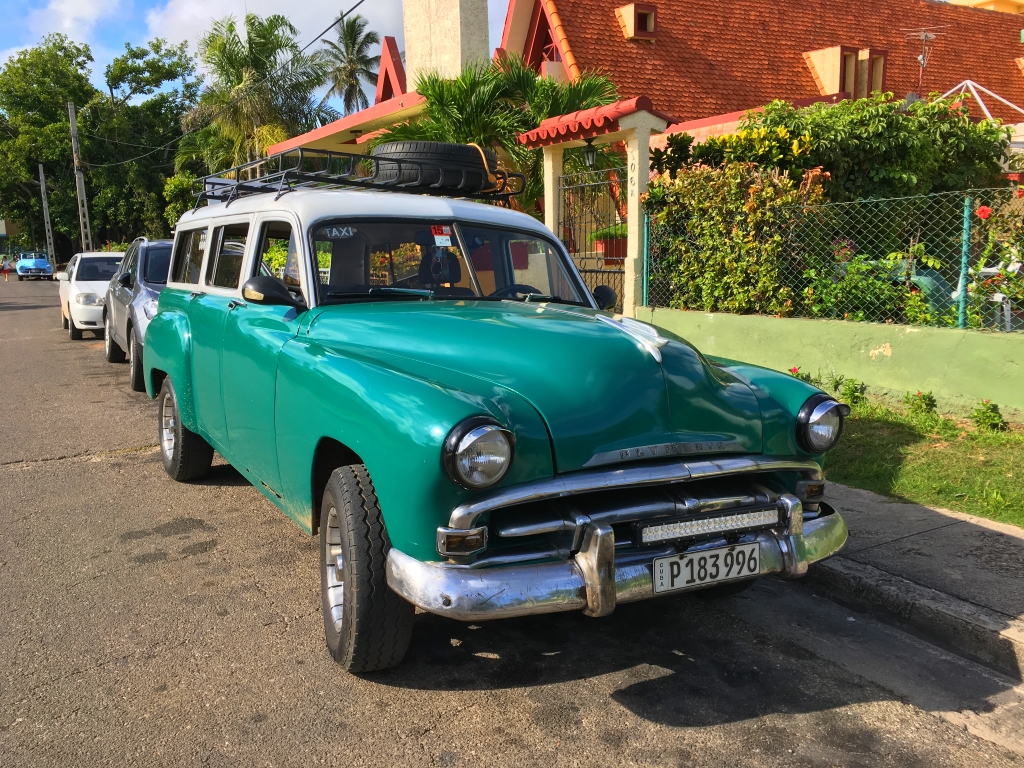 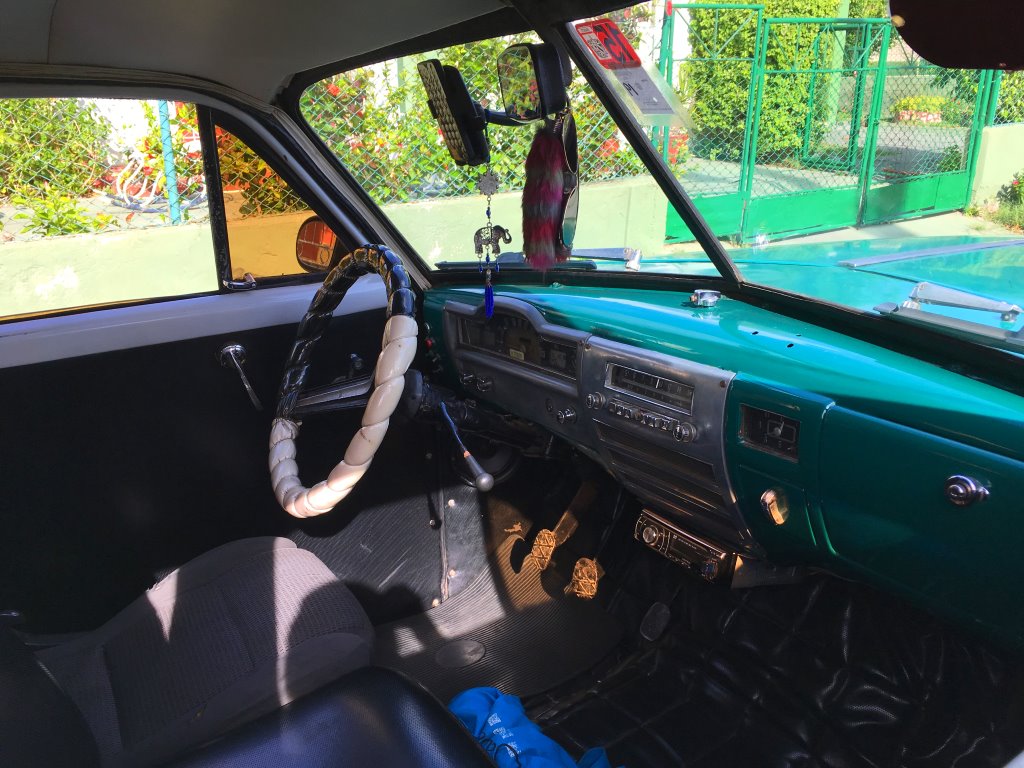 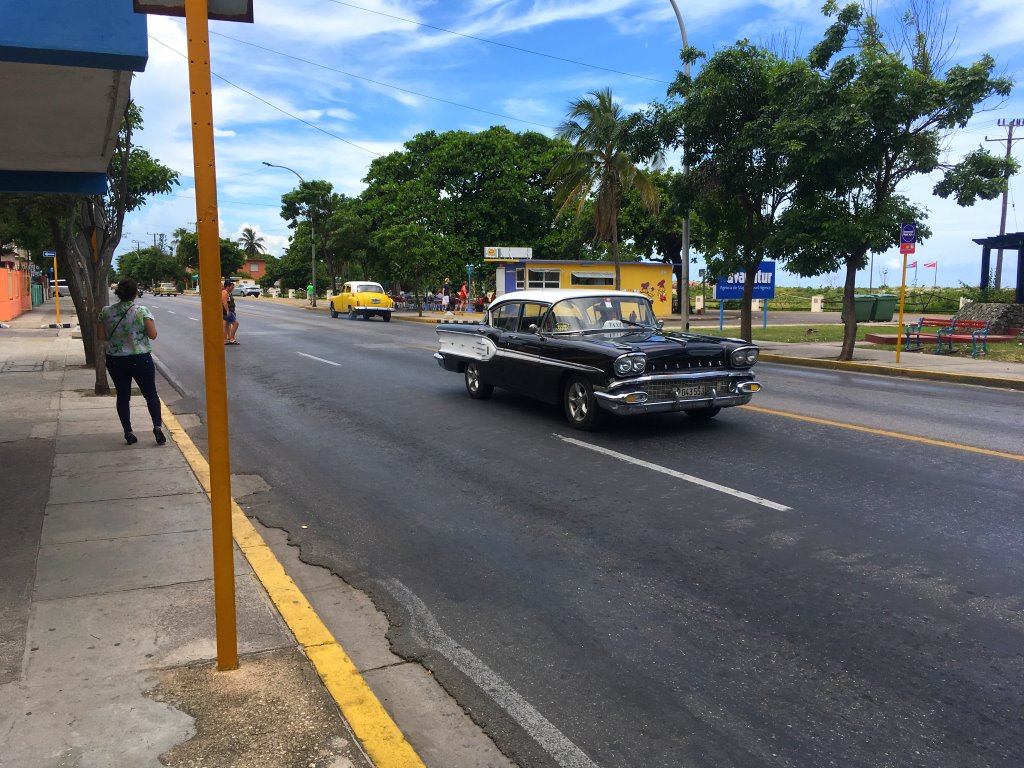 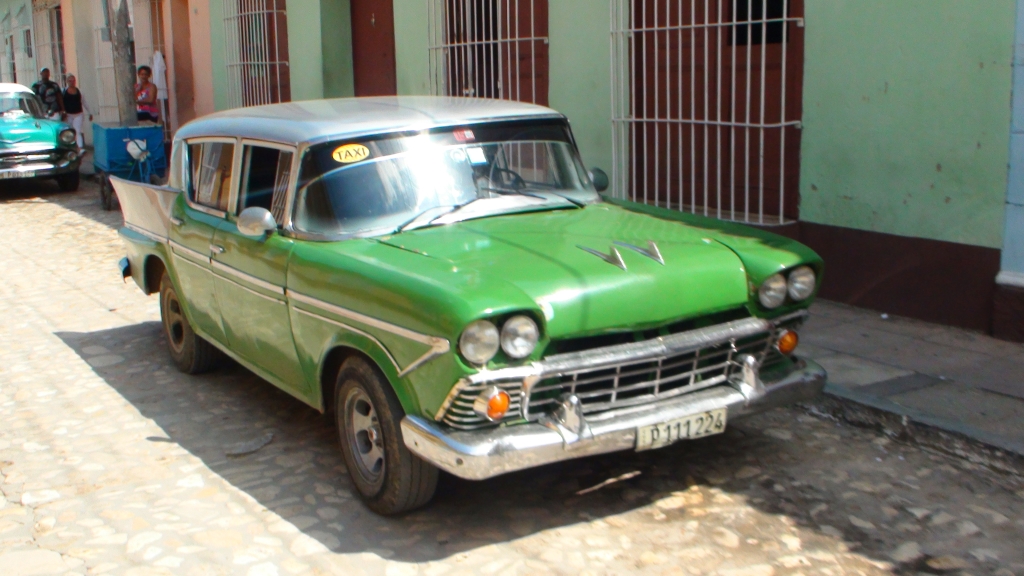 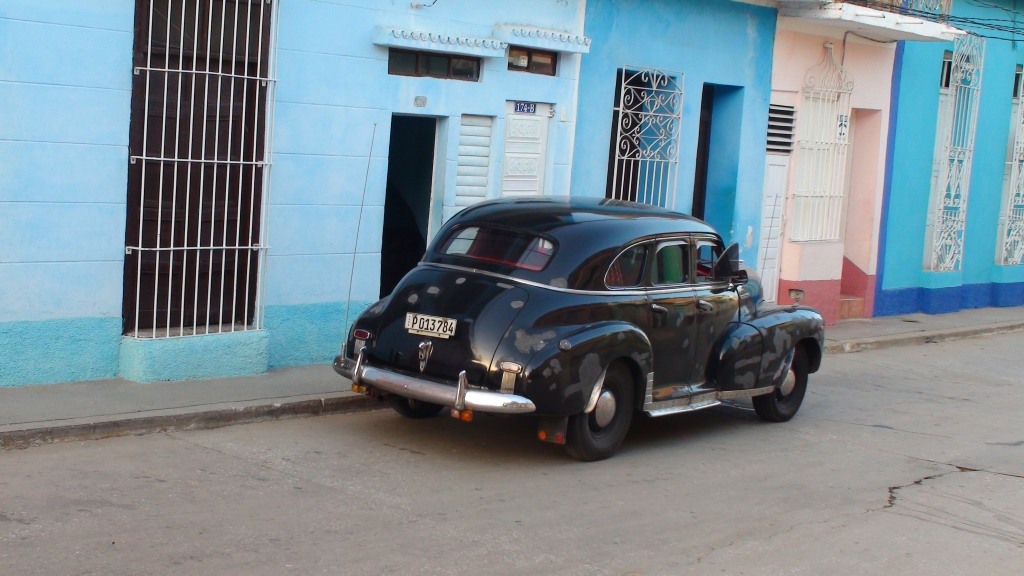 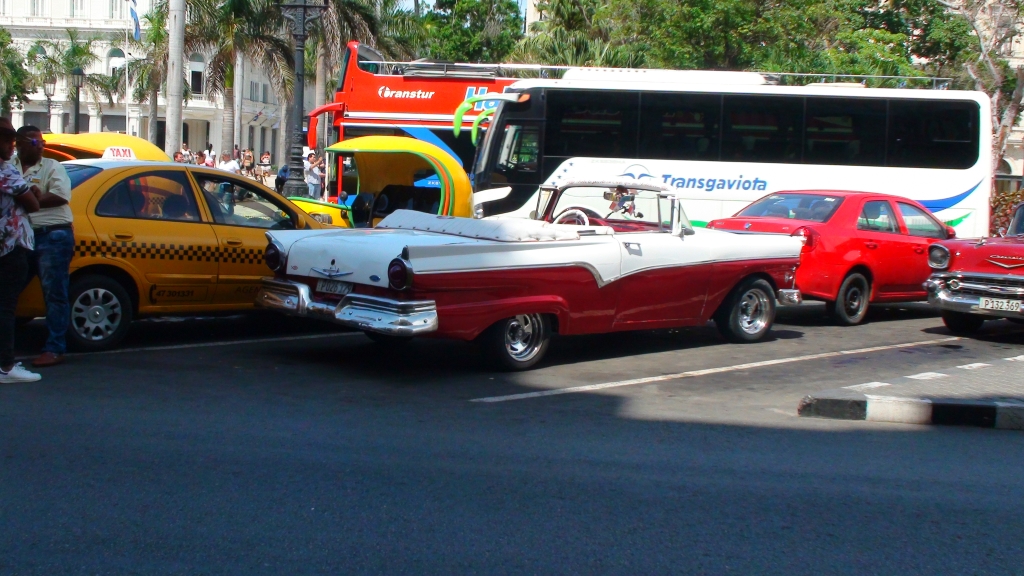 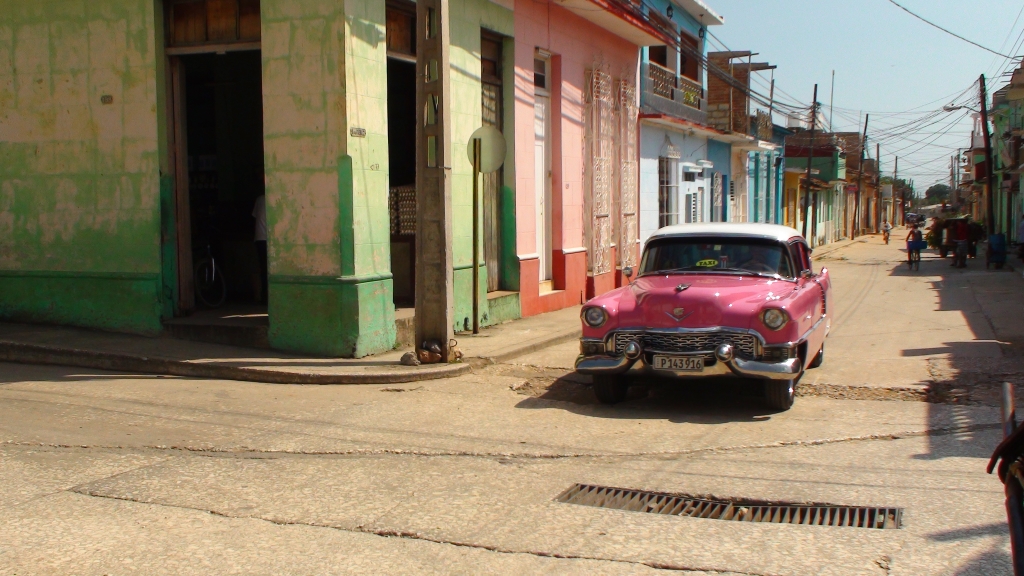 In Cuba you can also find some American cars from the 1970s and 1980s like this little Dodge: 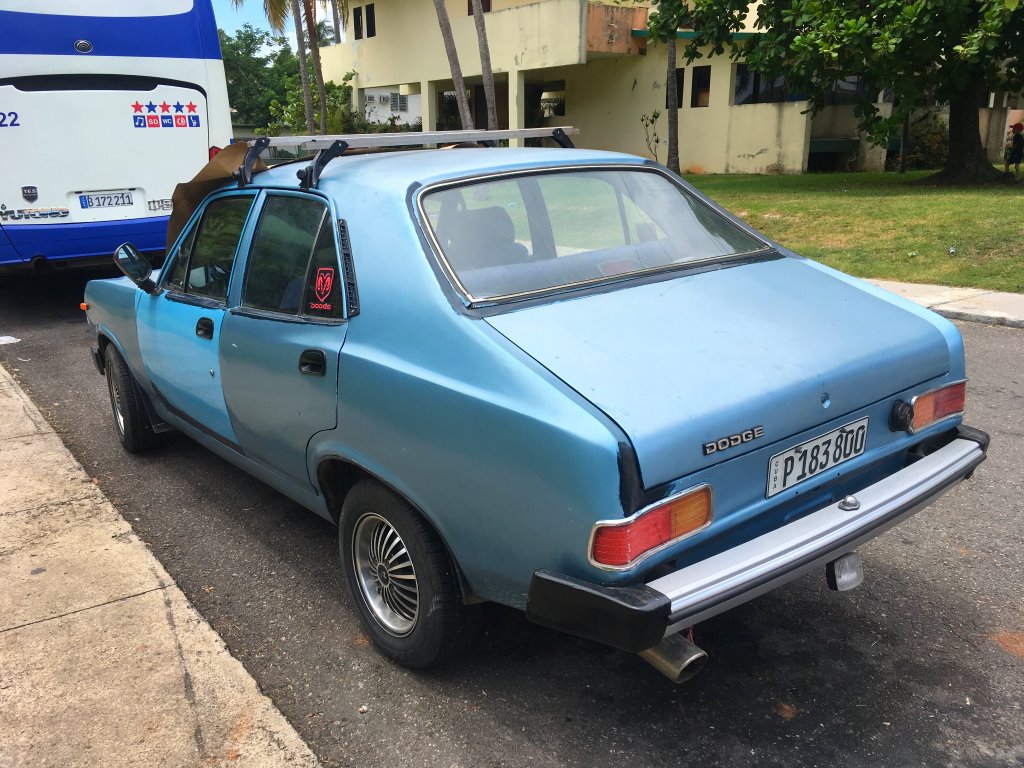 There is influence from Obama times when the two economies re-established the economic relationships like this GMC truck in Varadero. 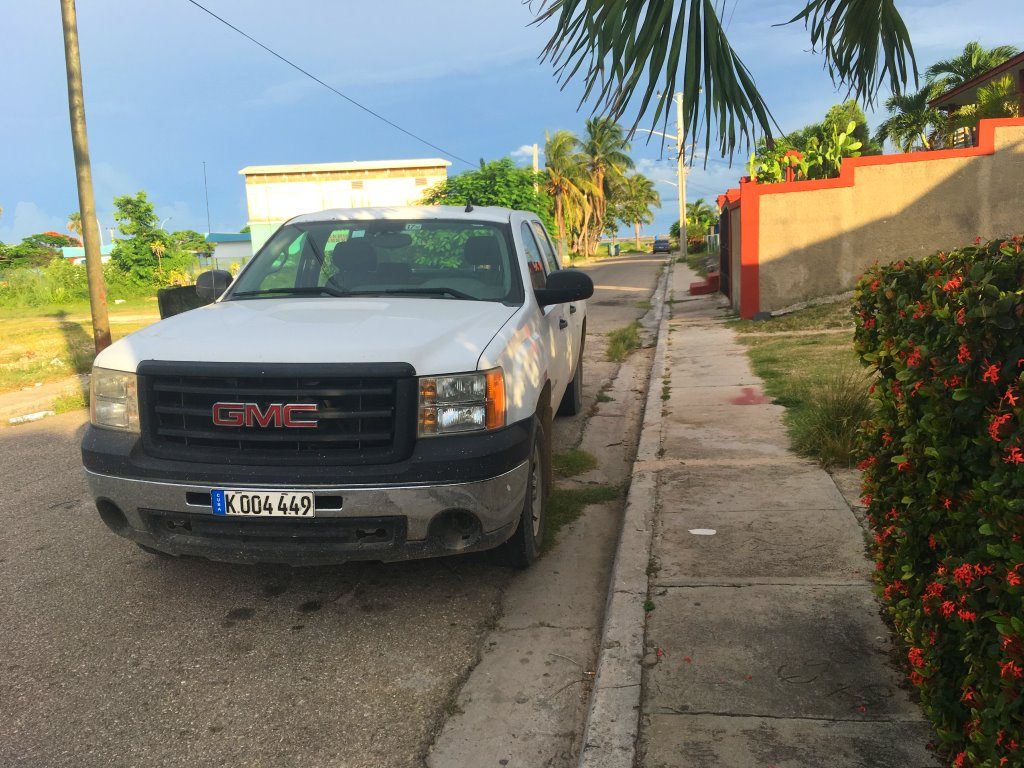 There are mainly two Russian automobile manufacturers ion Cuban roads: Lada and Moskvich. Lada has made its name in Europe with cars like Samara and Niva (one of the best off-road cars made ever). The most popular models are the boxy Ladas 1200s and 1600s that got a facelift in the second part of the 1980s with an even more boxy shape, but with a lot more plastic. There are Samaras and Nivas too. But the more appreciated Russian manufacturer in Cuba is Moskvitch. Or “Mosk-o-witz” as the locals pronounce it. They say Moskwitch is slower but stronger than Lada. A good representative is the Moskvich 2141 Aleko from the 1980s as a competitor to Lada Samara. Like the old American classics also the Russian oldtimers do not have air conditioning, so they are most useful for city tours or trips to the beach. But sometimes, in your many moments of deep admiration about the Republic of Cuba, the taxi drivers will also be able to convince you that open windows and internal car fan will keep you cold. And you’ll take the offer just for the fun of it.

In the last years, new Ladas have appeared like modern day cars, but they do not sell in Europe or the US. They are mainly used as taxis.

Chinese cars fit in the group of the cars that has the newest models in Cuba. Besides they offer more comfort for longer tours, they are also the most boring to see. A Chinese car, the Geely, would look like Opel/Vauxhall insignia from the front and a 2006 Audi A6 from the back. Geely seems to be the most common state-owned taxi car, while the second strongest Chinese car in Cuba is MG. Yes, the renowned originally British manufacturer “Morris Garages” from the 1920s known for sportier models has fallen under Chinese ownership. In the Cuban countryside, there are a lot of new modern tractors replacing the old Russian ones. And guess what – they are from China.

But Chinese cars are not always of the top quality. Melvin, a cab driver from Cienfuegos, likes to tell that his ’69 Fiat runs better than the shiny Chinese imports. He is a graduate mechanical engineer and he maintains his car with love. He would tell you that a Chinese car could start steering by itself when you take your hands off the steering wheel.

Cubans know to appreciate good quality, so their dream car is a Hyundai or Kia.

There are many cars from Europe in Cuba. The cars that existed in the classic American era, like the old Mercedes. Predominant are Peugeots, Citroens, Renaults, Fiats from the 60s, 70s, 80s, and 90s, because the EU never raised a serious embargo against Cuba.

One of the best cars you can see in Cuba is a new model Audi S6, that was driving around Varadero with Cuban license plates in the summer of 2018 (sorry, no foto available). If you live in the EU you will see the type of cars your father or even your grandfather had back in the days.

So Melvin, again, will also like to tell that his old Fiat is the original for what the Russians did with a Lada or Moskvich. 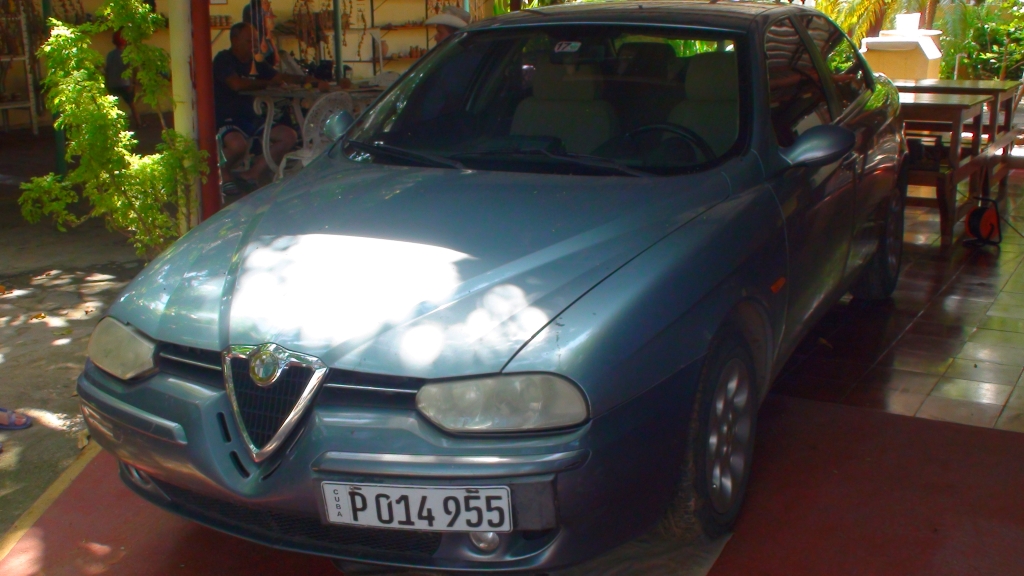 … and Fiat’s younger sister Alfa Romeo. Both from the same factory as Ferrari. 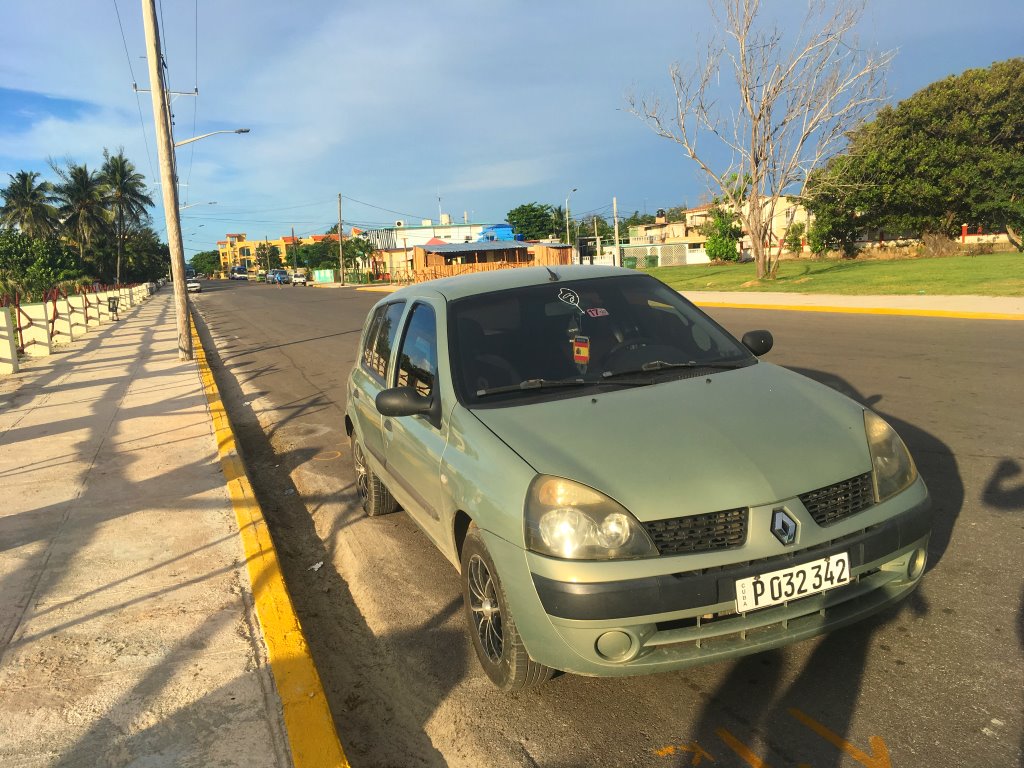 Greetings from France. Renault Clio is also present on Cuban streets. You’ll have to check twice if it is an electric one. 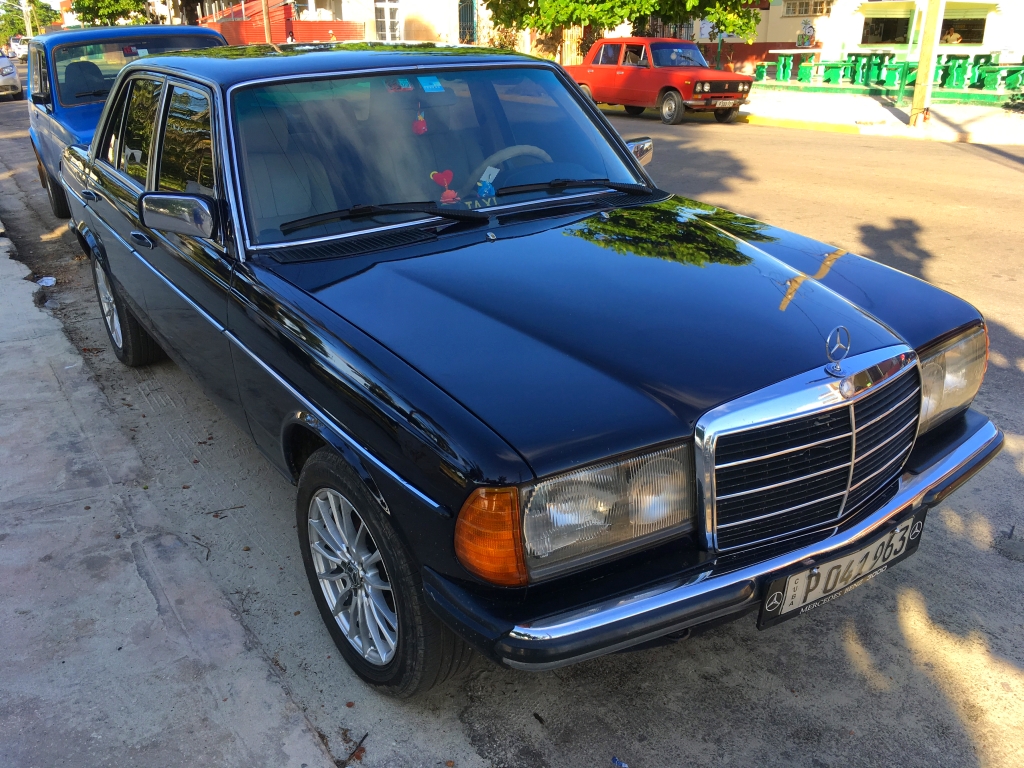 Cuba is intensively undergoing an electric vehicle revolution. It is backed by China’s friendly import to the island. Electric cars are divided into two groups: Kia Picanto rental cars and electrified old cars that used to be fuel powered.

It is also not uncommon in Cuba to see an old Peugeot 206 or a Lada running on electricity. The fuel engine was taken out and was replaced by a Chinese electric vehicle kit. But these Kias are originally produced as electric.

You should search car hire aggregators like OrbitCarHire.com for the main car hire providers in Cuba rental car Rex, Cubacar and Havanautos. They would offer new cars, like the Kia Picantos (electric), Renault Sandero or the new Mercedes C class. They are normally in silver color. The driving in Cuba is pretty safe because the other cars are so slow. They have highways between bigger cities and they normally stick to the speed limit.

How to buy a car in Cuba?

The car prices in Cuba are hard to understand. An old Volkswagen Polo from 2008, 1.4 fuel engine, with 500.000 kilometers costs around 40.000 EUR (44.000 USD). Yes, you heard it correct! Like a fully equipped new comfortline Passat with an economic engine that blows your mind. On the other hand, the price of an old American car like 1950s Chevrolet could cost around 20.000 dollars. The same price tag as for 1980s Moskwitz from Russia. Just for comparison, a horse (yes, the animal) on Cuba will cost you around 800 dollars. And new Chinese electric motorbikes sell for 1.300 dollars.

So how to buy a car in Cuba? The fastest way is to buy it from “second” hand, if someone needs money they will put an ad on the home door then the word of mouth would spread and the owner would be found. The car would be at best from the 90s. If a local would like to buy a newer car, like the Polo mentioned before, they would need to buy one that was previously used as a rental car and got at least 400.000 kilometers on the meter. These cars are then sold on the market.